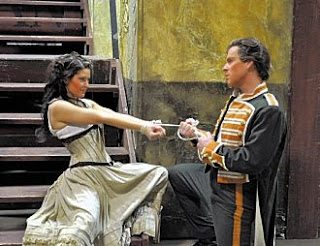 If you think a 19th century opera can’t possibly be relevant to 21st century life—think again.

Consider the story of Carmen: Carmen has an affair with Jose, but when they grow sick of each other, he doesn’t want to accept that she’s done with him. After Carmen moves on to a new lover, Jose confronts her and begs her to come back to him. When Carmen refuses, Jose kills her.

What’s the difference between the 19th century Jose and a 21st century stalker killer? Two centuries, that’s all. Their thinking about women is the same. Even when Jose is tired of life with Carmen, his possessiveness is so strong that he turns his back on the love of an innocent girl from his village, and follows Carmen to confront her. He says he loves her, but the truth is he’s operating from an “If I can’t have you, no one can” attitude that has caused the murder of many a woman. Love does not cure all in this sad story whose theme still is so frighteningly current.

Carmen is a very popular opera. You can see it performed in practically any city that does opera, almost every year. The music is lively and so entertaining that the San Francisco Opera even has a “Carmen for Families” version. This leaves me scratching my head: just what part of the story of a stalker murder is suitable for family viewing? Okay, the music is wonderful, but the story is miserable. 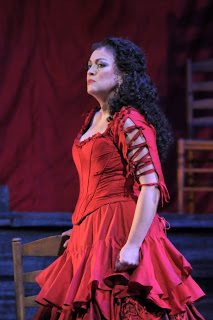 Of course this tragedy deserves airing again and again, because the wrongness of Jose’s action continues to resonate in our modern world. Jose epitomizes the dark side of love, when a man can’t take no for an answer from a woman. What better way to remind ourselves that women deserve to be free than to see the tragedy that occurs when a man won’t accept that idea?

Still, I find Carmen hard to watch, even if offered in the latest gimmick, in 3D. I keep wanting the tale to end with Carmen walking happily into the bullring to greet her new lover, and Jose, finally accepting reality, going home to his village to see about that nice girl next door.

I know. I’m a hopeless romantic. Just one day after Valentine’s Day, our officially most romantic day of the year, it is cautionary to consider that Carmen is the world’s most popular opera.