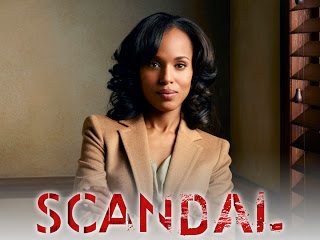 Is America finally ready for interracial romance? The hit television show, Scandal, is about a media spinner, someone who shrewdly cleans up the messes politicians create for themselves, especially the sex scandals. Yet she’s secretly had/having an adulterous affair with the president. She’s black and he’s white. Okay, she’s African American and he’s a preppie WASP with a wife. Oops.

I’ve seen quite a few televised ads for this show, but none of them show the president in the same clip as the fixer in any intimate way. As usual, the fact that there is an interracial relationship is coyly hidden, to be revealed only once a viewer has bought into watching this show. As usual? Yes. We have a long tradition of hiding the truth of any romance that crosses ethnic lines, and that tradition continues today. So is this mainstream treatment of an interracial romance a step forward? 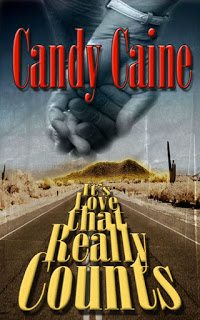 Candy Caine’s It’s Love that Really Counts is a spicy interracial romance about two mature people who fall in love and whose families are against their relationship because it is interracial. The cover art doesn’t suggest an interracial romance, does it? This looks like women’s fiction, a subgenre of romance that usually is about older heroines and their families. It’s an honest enough cover. A typical women’s fiction cover has scenery and no people. But this cover art also follows a tradition that has held until very recently, a tradition that any interracial romance published in this country had blurred cover art in some fashion, making it impossible to determine that the two main characters were different racially. One of the characters would be in shadow, or neither character could be easily discerned, or whatever. Another aspect of these covers was that they didn’t show a clinch–even though a clinch is the most accepted romance cover concept of all time. The theory went that readers might be willing to read about an Asian American heroine or a Latina heroine or any other ethnicity in love with someone of a different ethnic background, but only if they could be tricked into doing so. Nobody in conventional publishing was willing to make a bet that romance readers would buy an interracial romance if they knew that’s what it was, so no publisher put the characters’ faces together on a book cover—and especially not smooching. “White bread” characters dominated romance novel covers, and the cover blurbs on the back often weren’t particularly honest, either.

The lovely Internet has changed all that. Suddenly, anything goes. Self-publishing authors, indie publishers, print-on-demand publishers, ebook publishers, and all flavors of Internet publisher have been willing to release romances that the established publishers have not believed will appeal to the majority of the romance audience. And perhaps they don’t. The Internet allows people to publish books that might appeal to smaller numbers of people. These mostly newcomer publishers also can release romances that they are fairly sure might enrage or disgust some segments of the book buying public, without fear of consequences.

Not that consequences are that big deal anymore. The only consequences these days for a book with a visibly interracial romance might be some lost sales. Or maybe not even that. If you check out the list of America’s most banned books, you’ll find literary classics like Huckleberry Finn, questionably valuable books like The Anarchist Cookbook, and even silly kids’ books for young readers, like the Captain Underpants series. But you won’t find interracial romances being banned. We are past that. Interracial romance is no longer illegal in any state, nor is interracial marriage. Romance readers today can find many stories that seldom were published by mainstream publishers in the past, but now are commonly available. 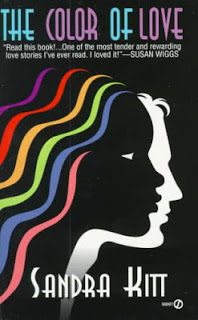 Now we are all over the map when it comes to covers. Compare the discreet cover of my old pal Sandra Kitt’s 1985 interracial romance, The Color of Love, published by a major publisher, Signet, with a newer romance available online from a small indie publisher, The Grunt, by Latrivia S. Nelson, out in 2011. Or one published by media giant Harlequin, Mommy and the Millionaire, by Crystal Green, in 2008. The newer books have covers showing people, but the coloration of the characters embracing and the way they are painted in The Grunt does not instantly suggest that this is an interracial romance, although it does suggest passion. The heroine on the cover of Mommy and the Millionaire, while clearly African American, is obviously not the sistah living in an urban ghetto. She’s middle class all the way and there is no visible passion between her and her white bread love interest on this cover 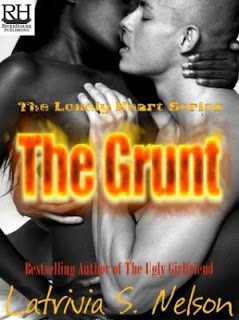 There are hundreds of interracial romances available today, far more numerous than you or I can read in a year. This is wonderful. Interracial romances are getting to the public at last. As long as their advertising fairly represents the type of story each really is, we don’t have to care too much about how they are advertised. We are daring enough online, but not quite so daring in other venues. You won’t see a lot of interracial romances with explicitly interracial covers in bricks-and-mortar bookstores, and you don’t see it in ABC TV’s ads for Scandal. I do wonder, though, when a major television network airs a show about a glamorous, successful African American woman who has a questionable romance with an establishment type like a married WASP president, if the rest of the media has caught up with interracial romance novels. Or if the relationship in Scandal is even a romance. What do you think? Does adultery, even today, between a supremely powerful man and a less powerful woman truly qualify as romance? 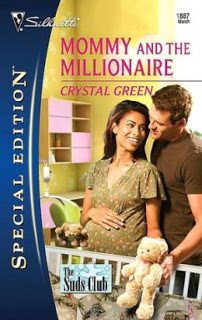 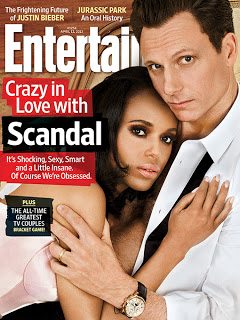 Edited to add: Entertainment Weekly finally put the Scandal hot couple on its cover. But highly computer tweaked, in my opinion, to reduce skin color variation between the two. I am still not convinced we have entered the colorblind era. On the other hand, at least they’re together, embracing, and on the cover of a major national magazine.