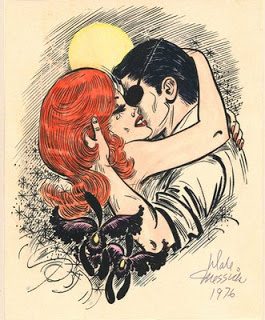 The big news this month for romance fans is the announced ending of the venerable Brenda Starr newspaper comic strip on January 2. Who is Brenda Starr? Only the most glamorous, the most daring, the most romantic newspaper reporter ever (yes, even more so than Lois Lane). Brenda Starr had beautiful red hair, clothes to die for, and stars in her eyes. Literally. Her creator, Dale Messick, drew her with that sparkle, an artistic conceit that always made Brenda look romantic and special. Brenda’s adventures were even more romantic, because Brenda Starr’s one true love, Basil St. John, was a man of mystery who came and went in her life. In between, she did date or get emotionally involved with other men, but her heart always belonged to Basil. Basil of the romantic eye patch, the wealthy background, and the fabled quest for a black orchid serum to keep himself alive. Treks to South America to find that black orchid were a wonder of my childhood Sunday newspaper reading. Sundays were especially exciting because Brenda Starr’s blazing red hair and lovely clothes were depicted in color.

It has been 70 years since Dale Messick pitched this strip to the Chicago Tribune and was hired, a strip she never technically owned, so its major success did not enrich her. In a field of mostly male artists and writers, she stood out, and she did become famous. But unlike Milton Caniff, who chose to abandon his wildly successful strip (Terry and the Pirates) to start one he could own (Steve Canyon), Messick never dared. She was always a salaried employee of the Chicago Tribune. After she retired in 1980, other women artists, notably Ramona Fradon, Linda Sutter, and June Brigman, and writer Mary Schmich have filled in the gap. Messick herself died in 2005 at the age of 98.

Why stop Brenda Starr now? The current creators of the Brenda Starr strip felt it was time to fold their tent, and the newspaper decided not to replace them. Newspapers are in dire trouble, as we all know, because cell phones and the Internet provide instant updates on vital news. A byproduct of this shift is the realignment of how the public accesses entertainment that used to go along with the news. In this 21st century scenario, the newspaper owner of Brenda Starr does not yet see a clear future for her. The concept of a girl reporter is 70 years old, after all. Brenda Starr may live on in graphic novels, in compilations of her older adventures, or in some other format such as an immediate download to an iPad or similar device. 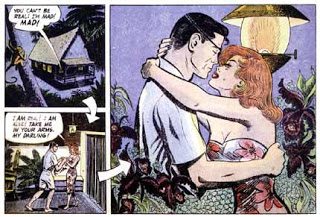 The idea of a daring girl reporter who is also a ditzy romantic with stars in her eyes doesn’t quite play today. We’re now used to women working in most fields, plus reporting is not quite the glamor occupation it used to be. Brenda Starr, White House correspondent? It’s not titillating; it’s the norm. Brenda Starr, daytime TV talk show host? Does that make Basil St. John the co-host? This just doesn’t sound as exciting as a trek to the Amazon to search for a rare or nonexistent flower. Or a man. Daytime talk shows and nightly news reporting don’t provide many opportunities for wearing a glamorous sarong, either.

We’ll miss Brenda Starr, a role model of a prior age, who epitomized her era by being a uniquely strong woman who held her own in a male-dominated business, yet who gave all for love.