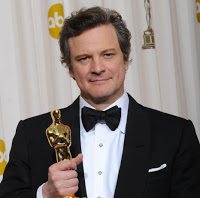 Colin Firth just won the Best Actor Oscar for playing King George VI of England in The King’s Speech. It’s not a romantic, heroic role in the conventional sense, since the king is happily married as the story opens and remains so. His big issue is his stammer. Being thrust into rule because his brother abdicated for the love of a divorced American commoner (and fashionista), King George had a sudden need to become a deft public speaker. After all, he lived in the age of consummate speechmakers, amongst them Franklin D. Roosevelt, Winston Churchill, and Adolf Hitler. The king had to learn to hold his own, and Colin Firth triumphed in the role showing the king’s struggle.

But we already loved Firth. He won our hearts years ago when he played Mr. Darcy in a 1995 BBC television series version of Pride and Prejudice. As Darcy, he showed that perfect combination of adolescent mulishness and fleshy, Byronic handsomeness that epitomizes Darcy’s romantic appeal. He bowled us over. He didn’t quite attain the status of teen idol, but he certainly caught the attention of the romance crowd. We even forgave him in 2001 for that awful Christmas sweater in Bridget Jones’ Diary. We’ll follow him into grizzled or paunchy old age, always cherishing his peak as Darcy. 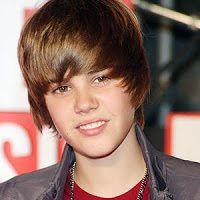 Meanwhile, in teenagerdom, Justin Bieber is the current idol, just beginning his own story of gaining the hearts of a generation. Very young girls go crazy wherever Bieber appears. He’s a singer. He’s a hottie. He’s a teenager whose romantic appeal is mystifying to an older generation that thinks he needs a more manly haircut. This is his moment, though, so he is included in all sorts of media events, and he pops up in commercials and on television shows, and everywhere else a teen idol goes during his brief reign.

Colin Firth will always be king of some hearts because of his Darcy turn, and now the world recognizes him as king. For a new generation of young girls, Justin Bieber is the king and will remain king. We also have a generation, getting elderly now, who screamed, cried, and fainted at the live performances of Elvis Presley, who even in death is called “the king.” Before him, a generation swooned over a crooner named Frank Sinatra. Since then there have been plenty of teen idols to choose from. Which Beatle won your heart? Which member of the Backstreet Boys or ‘N Sync? Justin Timberlake has carved out a successful solo singing and acting career, and Joey Fatone is doing okay in television, but were they your idols? Or are you of the generation that fell hard for Michael Jackson? Or Harrison Ford? What about Robert Pattinson, the sparkly vampire in Twilight? We have an endless supply of attractive men to reign in our hearts. All hail the king!