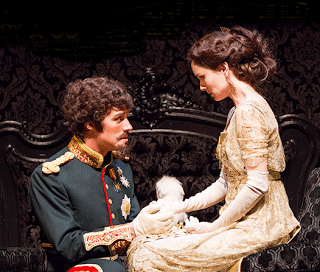 Love is a comedy, or love is a tragedy, or we simply do not know even while we are in the midst of it. Because we do not know, we have to consciously decide to be happy, or not.

Such is the ultimate answer of the drawing room comedy, The Guardsman, a farcical play by Ferenc Molnár. He was a Hungarian who became an American, whose works were turned into many movies, arguably the most famous being Carousel.

Molnár has been dead for over 60 years, but The Guardsman still turns up in live theaters across the country because it’s so much silly fun. And because it asks a key question about love: do you trust the one you love?

Here’s the setup: A couple of actors are married, and he’s worried. Her track record before marriage was love ’em and leave ’em every six months. They’ve been married for six months and he fears she’s already bored with him. She plays a lot of sad music on the piano, but when he pokes at her with abusive words, she doesn’t respond. So he decides to test her love another way, by assuming an alternate identity and wooing her. A sting, in other words, but he soon realizes that if he wins, he loses. He even gets jealous of his alternate identity as the noble guardsman hopelessly in love with a married lady.

Underhanded plans like these to test someone’s love usually go awry, and they deserve to. As The Guardsman unfolds, the hero sends a beautiful bouquet from his alter ego, the guardsman, and then enacts a jealous scene to his wife when the flowers are delivered and she refuses to divulge who sent them. It’s silly, and it doesn’t prove she’s in love with his fake persona. He tries again, but when she invites her suitor to tea, there’s no way of being sure if she sees through his disguise or not. She’s an actress, after all. He gets no answers because she has allowed the guardsman to flirt with her. Even after a private rendezvous in which a kiss is exchanged, the hero still is not sure. His supposedly clever ploys haven’t revealed any incontrovertible truth. In fact, by the play’s end, our hero has been flummoxed by his wife, and has the choice to believe what she says is the truth of the comedy they’ve just enacted, or believe something more heartbreaking, that she fell in love with his fake identity as the guardsman.

Which is why a 100-year-old play is still relevant to us today. When we aren’t sure of our lover, we are tempted to set up tests. It’s always a mistake. Testing bias will taint the situation and make the results unreliable. (After all, why wouldn’t she recognize her husband in disguise?) And a lover is not a lab rat. We really don’t have any moral right to toy with the emotions of another person. Finally, since we won’t necessarily like the results, why set up a sting in the first place?

Although the “We need to talk” line often fails because it sets up a formal situation, finding a safe place to reveal one’s worries and listen to the other person’s response is the key to regaining peace of mind in the relationship. Putting on a wig and using a foreign accent might be more fun to begin with, but it simply doesn’t yield credible results in real life. On the stage, though, it’s a hoot.