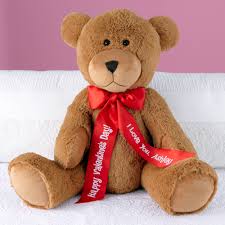 I’m trying to fathom what is romantic about a teddy bear to a grown woman. Memories of childhood and a lack of a romantic (sex) life? Essential cuteness (“Aww…”)? Lack of upkeep required? (You don’t have to feed or water a stuffed animal.)

Perhaps these bears are frequently altered to “carry” a discreetly wrapped jewelers’ box, jewelry now having overtaken red roses as essential to a proper Valentine’s Day. Red roses, very expensive and not long-lasting, are still massively popular with givers, but roses alone apparently are not enough anymore. And candy? That’s a fraught issue considering all the dieting American women do. Yet the grocery store Valentine’s candy shelves were nearly empty the day before February 14th. What does all this mean?

Specifically, what’s with the bears? Let’s say you give a woman a teddy bear this year, and next year, and so on. Where does she keep them? What can she do with them if some romantic saying is embroidered on them? These are not tiny little toys, by the way. Most of the ones I saw were at least a foot high. They take up space, and unlike the more traditional flowers, candy, and jewelry, they can’t be tossed out when they fade, be eaten, or be tucked into a jewel box. I’m imagining a row of teddy bears circling a master bedroom until the occupants are being stared at by a host of fake furry animals. It’s the opposite of romantic—unless you’re into bear shape shifter romances. And yes, there really is a subgenre of paranormal romance novels all about bear shape shifters. 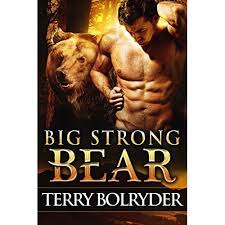 There also are romances about ferret shape shifters (I kid you not), but most shape shifter romances seem to focus on animals that are capable of being deadly to humans yet don’t possess an ick factor. So, no snakes. Presumably, it’s the “he’s got to be dangerously stronger than me” thing. Now that men and women are socialized to treat each other more equally than ever before (we’ll ignore for the moment whether they do or not), we’ve come up with a fiction dynamic that allows the balance of raw physical power to shift from a rational zone to an irrational zone. After all, it is a rare individual who communicates successfully with a wild beast.

In shape shifter romances, the teddy bear who turns into a rage bear and then back into a sweet guy somehow does communicate the usual loving goals of a normal human male—including the desire to mate for life, of paramount importance in a romance. I can see why women might be attracted to romance about men who turn into bears. I’m not so sure about all those Valentine’s Day stuffed animals, though.