Romances seek the ideal of lifelong married happiness. In reality, many marriages end in divorce, sometimes as many as half. The trend is not completely negative. According to a fascinating scholarly study of marriage and divorce, divorce has been declining since 1970. So has marriage, by the way.

Why then do we imagine our romantic heroes and heroines can find true love, get married, and be happy together the rest of their lives? Are romance readers deluded?

The short answer is: probably no more than anybody else. We are no more deluded about marriage than we are about other aspects of our lives. We tend to think whatever we strive to achieve will become permanent. Yet people change careers, move from one part of the country to another, go from urban to rural or the other way around, and constantly bring new people into their lives. Our bodies change over time, from the cellular level to the visible signs such as scars fading or hair graying. Even so, wherever we are in our adult lives our basic tendency is to believe this is where we will stay. Humans like permanency, even though that is not our reality.

Many people do find true love and a happy ever after. Unfortunately, to my knowledge no one has ever studied romance readers to learn if we have a higher proportion of long-lasting marriages, and also describe them as happy, than the general populace. I would like to believe romance readers have a corner on good sense and good luck, but until scientists confirm this, it’s just a hope.

When we hope for long-term success and get failure instead, we have a choice. We either dump the failure as a regrettable instance of bad luck, and continue to hold the same ideals as before, or we revise our view of life, and look for something different. Many divorced people marry again, in what Oscar Wilde called the “triumph of hope over experience.” 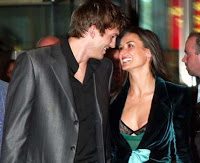 Hollywood gives us constant examples of such behavior. The predictable bust-up of the Demi Moore–Ashton Kutcher marriage is just another in a long line of high-profile Hollywood relationships that have gone sour. While some people ascribe this particular failure to their May-December ages, the fact is many such marriages don’t make it past the seven-year mark.

Is this frequent churn of partners the famed seven-year itch in action? What is the problem? These people are handsome, rich, and famous, not to mention some of them are talented. Why can’t they stay married? One web page suggests many actors marry for the wrong reasons. They do a movie together and the intimacy of the work makes them crush on each other. Then they discover they can’t sustain those feelings when they return to real life. Another problem could be they get hung up on disparities in their fame or income (the “A Star is Born” syndrome, where one partner’s fame rises as the other falls). A third reason for Hollywood marriages to fail is the work obligations that keep couples apart. Hollywood couples experience the loneliness of being without their partners while at the same time often being in a strange new place surrounded by attractive new people with whom they are required to be intimate on camera. It’s a recipe for infidelity.

Considering how often Hollywood marriages churn, it’s not surprising that few romances feature big movie stars as their protagonists, either male or female. Even in our fantasies, romance readers know some marital combinations are doomed to fail.

Those poor Hollywood people. How sad. (Really. They look so happy when they get married, but it ends so soon.) The good part is, they get to leave. The wealthy and famous have advantages over ordinary citizens when a marriage goes bad. They have enough money to take care of their children, so they don’t stay in bad marriages strictly to ensure the kids have new clothes and dental work. If they are abused, they split right away. High-profile marriages often involve prenuptial contracts, so their money is protected far better than that of ordinary citizens. They don’t automatically fall into poverty because they divorce. They don’t necessarily lose their social circle, either. Finally, because their bodies are part of their stock in trade, they always are attractive to other people. They have immediate opportunities to fall in love all over again. And they do.

Today, people are often advised to start any job with an exit strategy in mind. We know employment is unlikely to be long-term anymore, and so to protect ourselves, we need to consider the endgame. Not everybody does, of course. People who contract serial marriages, such as Demi Moore (who now is a three-time loser), may have hopes for each future relationship, but they also have business managers who advise them how to protect their assets should the marriage end. The rest of us are on our own, and we still aren’t thinking of marriage as a life stage that requires an exit strategy. Perhaps we should. Instead, just like these hapless movie stars, we look for love, we hope we have found it, and we hope it is permanent. Since we can’t look to the lives of the rich and famous for perfect outcomes, we look to romance fiction, where the ideals of happy ever after still burn bright, and there is no seven-year itch.