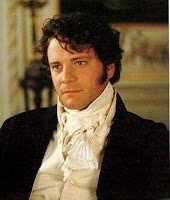 I read a blog recently—one of many that discuss this idea—that compared Mr. Darcy (of Pride and Prejudice) and Heathcliff (of Wuthering Heights). Of course Darcy won, but most of the comments on the blog suggest that we are strongly influenced by the movie representations of these characters, to the point of ignoring what the authors put on their pages. This made me, briefly, want to reread Wuthering Heights, which I read as a teenager and frankly did not understand—it’s very full of moody expressions of indeterminate passion, perhaps talking about the lousy weather symbolically when really meaning sex. Maybe. I disliked everyone in the story so much that I can’t see myself slogging through it again.

Which brings me to an interesting realization, because in fact I have reread all of Jane Austen’s works more than once, and Pride and Prejudice numerous times. For one thing, it’s a darn funny book. For another, it’s Cinderella romantic: the worthy young heroine, who is facing a penniless future but won’t compromise her principles to marry a buffoon like Mr. Collins, is rewarded for her steadfast scruples by marriage to the Richest Man in the Book. Plus, he turns out to be kinda shy, and really nice—-a sweetie, in fact, not intimidating after all. Who wouldn’t want this man as a husband? Add in the various movie and television images of Darcy as a hottie: Laurence Olivier, scrumptious and sensitive, Colin Firth, stubborn and hopelessly baffled by his love for the socially unworthy Elizabeth, and others along the way. Mr. Darcy is the obvious winner. Even with his dorky first name, Fitzwilliam—which suggests an illegitimate connection to royalty, since “Fitz” was a surname commonly given to their by-blows. 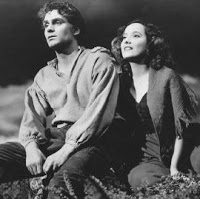 But wait, you say. What about Laurence Olivier’s total hottie Heathcliff, still the gold standard of all Heathcliffs despite Timothy Dalton’s later turn at the role? The 1939 movie simplified and vulgarized the themes of Wuthering Heights (it was not about marrying for money, not at all), plus it made Heathcliff a noble sufferer—-instead of the thug he is clearly described as in the book. Olivier carried all before him on his perfect manly looks, with his flowing white shirt and his aristocratic diction. The diction is a laugh, since in the novel Heathcliff is brought in as a boy from some city slum, probably the never-acknowledged illegitimate child of the landowner; undoubtedly, lower-class accents remained in his speech.

Illegitimate child, what’s that? By-blow, what’s that? Times have changed, and what used to be a serious social problem now does not appear to exist in America. Nobody seems to care if your children were born when you were not married to their father. I suspect that some people do care, still, but publicly, there is no odium heaped upon unwed mothers, no scorn, no casting out of the house with the words “Never darken my door again.” (Although when teenagers get pregnant, some parents do still throw them out of the house. Sad and cruel.) As for marrying in order to assure the paternity of children, with DNA testing widely available, no man has to do that. Inheritance of property isn’t the big issue it once was, anyway, because heritable property, as such, is not important in our society or our economy. Most people have jobs; they don’t live on land that Daddy left them. Usually, Daddy spent his last dollars on nursing home fees, and there’s not much left to inherit. With women having the means to support themselves, and men not being landowners as the core of their wealth, marriage as an institution to preserve a man’s genetic heritage and to assure the proper passing on of his land to his rightful heirs, and to assure a woman lifelong support as she bears and raises children, well, it all seems to be floating away into the dim past.

Then why, why, why, does anybody even care about Darcy or Heathcliff anymore? We don’t need either of these guys.

Still, the debate rolls along, with numerous sites on the Internet devoted to the question: which type of man is the man for you? Heathcliff is the guy who will have your back in a bar fight. Darcy would never be so uncouth as to take you to a bar. Heathcliff might be terrific in the sack, or he might be a selfish pig, but he certainly isn’t likely to have what is known euphemistically as a “slow hand.” But Darcy, ah, Darcy. Think how stubbornly persistent his feelings are for Elizabeth, how he doesn’t give up on her even after she flatly turned down his marriage proposal. He keeps trying. This man has patience.

Pause to fan myself. Okay, so I know who I am voting for, but in fairness, I should mention a few more traits these men display. Heathcliff would never subject you to a long, boring dinner with people you don’t like. He’s not the man to suffer fools gladly or waste his time on good manners. Darcy would be more dutiful, but you’d always be able to catch his eyes across the table and silently share with him just how absurd So-and-So is; what before was tedious now would be fun. Further, Darcy would tactfully solve the financial problems of your lame-ass relatives. Heathcliff would solve them, too, by ripping their greedy fingers off you and kicking them bodily to the curb, making it clear they aren’t to impose on you in future.

I guess it comes down to what kind of world you live in. If you perceive your world as unsettled, hard to handle, and physically dangerous, Heathcliff, with his brooding aura of passion barely leashed, is the man for you. He can slay dragons with his bare hands. If your world is more civilized, Darcy, with his good looks, social ease, money and connections, plus an easy-to-impress sister, would make a superb husband.