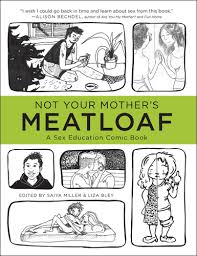 MyRomanceStory.com features graphic romance novellas. Sometimes our illustrations get fairly steamy, and the word “graphic” then has its full double meaning. Our comic book style illustrations are not out of line with what gets described in most prose romances being published today, but as with PG-rated movies, we cover up here and there. The bedroom door was opened decades ago, but since the sexual detail in a romance is always at the service of the romantic storyline, we treat these scenes with as much sweetness and decorum as the story allows. We elide the mechanical details and show the joy and satisfaction of communication between two bodies, and hopefully, two hearts.

Not so underground comics, which always have reveled in a warts-and-all approach, the very opposite of idealized romance. An interesting offshoot of same, an academic book called Not Your Mother’s Meatloaf: A Sex Education Comic Book by Saiya Miller and Liza Bley, utilizes the wide range of art and storytelling styles of underground comics in vignettes by individual creators. They tell true tales of young people discovering sex, learning what they like and don’t like about sexual relationships, discussing body acceptance, and more. It’s a collection of comic book style artwork ranging from the crude to the well-drawn. It also includes prose reminiscences by the two authors. 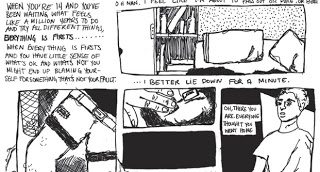 Each story is short. Some describe childhood moments of hilariously incorrect sex education (no, babies do not usually come from the “spurmm bank”). Some recount first sexual experiences, whether kissing, or cross dressing, or having sex while drunk. Some talk of relationships in which the sex was or became abusive, and the narrator finally realized it. A few stories simply are tales of sexual encounters, whether pornographic or disastrous. The reminiscence about blacking out at a party, waking up while being date-raped, and then throwing up had emotional heft, but its storytelling method did not appeal to me as a comic book art. It’s mostly words in panels, and barely any illustration. I prefer the very literal. Then again, I’m not sure I’d want to see that particular story drawn in real life detail. More accurately, true to my romantic inclinations, I’d want it not to be rape and also I’d want there to be an absence of puking and drunkenness.My romantic sensibility keeps me from appreciating these stories fully, and my own highly developed appreciation for line art also makes me irritated with crude drawing styles. It’s hard for me to know what to think about true stories like these. They’re all over the map, both visually and emotionally. Some are funny. Some are cute. Others are crude and obnoxious. Some of the drawings show talent. Others don’t. Probably the publisher of this book believes that telling truth about sex is much more important than drawing that truth well. I don’t entirely agree, but I am aware that we no longer live in an age of finely crafted commercial magazine and newspaper illustration. It’s easy to assume that the intended audience for this book might not even recognize (and might not care) that some of the stories are barely competent as visual art. As long as the stories tell a truth that people may need to hear. 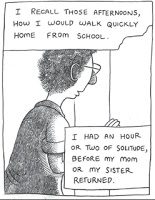 Underground comics, to my mind, were always notable for how crude, vulgar, and messy they showed humans to be. Nothing prettied up. No Disney princesses around. People had hair in awkward places. They sweated visibly. Not so romance comics. At their apogee, they were drawn by artists whose training and talent had been honed to a fine point. Everybody in those stories looked ravishingly beautiful. Even the few ugly or old people looked good. All the clothes fit and enhanced gorgeously curved women’s bodies or handsomely muscled men’s. The romance heroes were always tall. The heroines had beautiful hair, usually fashioned in the latest style. That’s what we aspire to at MyRomanceStory.com, and that’s why there are so many details of clothing and accessories. We’re trying to make these people look attractive and more than generic, not just a blonde in a red dress and a guy with dark hair. And certainly not just naked people. One of the ideals of a romance story is that the people in it are acting on a higher level of morality, discrimination, and honesty than people usually do in real life. They should look better than ordinary people do, too. It’s fiction, after all. 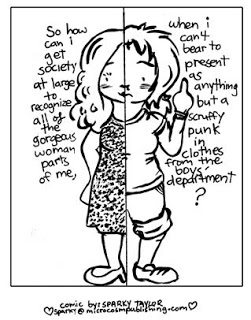 The more we know, in theory the more prepared we are to cope with the life experiences we will have. In reality, life usually takes us by surprise, as the stories of Not Your Mother’s Meatloaf mostly relate. Discovering that someone else has had a similar sexual experience or reaction to one is like free therapy. We want to know we aren’t weird.

There is no question that an effective visual is a lot stronger than mere words. Humans are wired to respond directly to visuals; being able to read a written language is a very modern human ability that we must be taught. It even resides in a different part of our brain than does visual memory. So the Meatloaf group has chosen a very powerful means of communicating their message of empowerment and honesty. I do wish it wasn’t so uneven artistically.