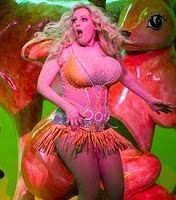 Anna Nicole Smith was famous for being trashy. A Playboy model and sometime stripper, she charmed a very elderly, very rich man into marrying her, and then spent the rest of her short life in litigation over his estate. Her train wreck reality television show and various public appearances while likely under the influence of drugs or alcohol or both bolstered her reputation for being tacky. Still fighting for her inheritance, she then had a baby. Far too many men claimed to be the unnamed father. Tragedy struck days later when her grown son died of an accidental prescription drug overdose. Mere months after, she herself died of a similar accidental drug overdose.

Given the outsize tabloid life Anna Nicole Smith led, it was inevitable that someone would do a play or a movie about her. But first, someone decided to do an opera. Anna Nicole just had its premiere in London last month, to mixed reviews. Some people liked it. Others damned it as an overblown Broadway-style musical whose content did not deserve operatic treatment—or at least, did not get a good enough one. The criticism seemed to center on the vulgar excess of the show, even though vulgar excess was the public reputation of Anna Nicole Smith. 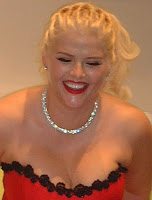 So why hasn’t there been a romance novel about Anna Nicole Smith? Because trashy, drugged-up ex-strippers with fake breasts who make mercenary marriages with rich old men and have affairs with many men are not romance heroines. At least, not in real life. The challenge for a romance writer would be to take the raw facts of Anna Nicole Smith’s story and turn them inside out, making her over into a genuine heroine by giving her more refined and heroic motives for her behavior, along the way suppressing most of her excesses. Romance writers do this all the time. They take a situation that is rife with amoral inferences and turn its central figure (our heroine) into an example of a fiercely moral person subjected to intolerable stresses, who makes a devil’s bargain. That’s been the main thrust of Harlequin Presents romances for several years now, after all, with its series of “rich man buys a bride” and “rich man extorts a baby from a poor woman” plots. In a less unbalanced power dynamic version of this theme, a young man becomes aware of the threat a woman poses to his elderly relative, and believes her sight unseen to be a bad person. Her motives are misunderstood in the most vulgar manner possible by the hero, who becomes her antagonist.

When he finally takes her true measure, he is convinced against his will that she is not the grasping harpy she at first appeared to be, and they happily make their own wedding plans. I’ve also occasionally read romances in which the heroine does marry the rich old man, but only at his plea to save his millions from a grasping relative. She doesn’t inherit them, but gets the legal right to divert them to the causes the sick old man cares about. Emilie Loring did a story like this about a million years ago, Love with Honor, and it was a fun read.

But romance is not about tragedy, and when Anna Nicole Smith’s son died, and then she died leaving an orphan infant, she passed beyond the optimistic realm of romance writing. She never found her Mr. Right, either, only a series of Mr. Wrongs and various bottom feeders. That’s why Anna Nicole’s story has to be an opera. Although she lived in the modern world, the basic arc of her life story could have happened at any time in history, which also makes it a fitting theme for operatic treatment. Poor Anna Nicole, flee as she might from the tabloid feeding frenzies she herself provoked, never appeared to have a clue about how to lead a happy life, unlike your typical romance heroine. But then, tragic figures never do. This opera may not be perfect, but making an opera about larger-than-life Anna Nicole Smith is just right. In romance writing, we’ll stick to stories that have happy endings.