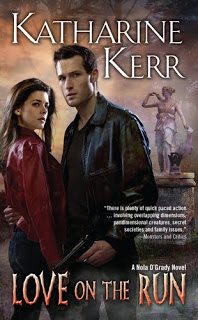 The Romance Writers of America (RWA) board of directors recently made a decision to eliminate novels with “romantic elements” from their two prime contests, the Golden Heart (for unpublished manuscripts) and the Rita (for published novels). A howl has gone up from one of RWA’s online chapters, the now-ironically named “Elements of RWA” chapter, which now feels like the proverbial redheaded stepchild at the RWA table.

Why is being eligible to submit a novel to the RWA’s Golden Heart contest especially important? Because placing or winning in this contest brings a romance writer to the attention of the top editors in romance publishing, and the top agents, as well as to everybody else active in the field. Although not every manuscript to win the Golden Heart has quickly been published by an established publisher, a large percentage have, or the next novel by that romance writer has, or the next. So, yes, there’s a lot to lose if your manuscript is no longer eligible for this contest.

“Romantic elements” is a weird category, though. Many urban fantasy novels and paranormal novels being published today have romantic elements, if you can call referring to being mated with a werewolf romance, or being in a relationship with a guy who is a 300-year-old vampire romance. Sure you can. But then again, I recently read a book by Katharine Kerr, the very incorrectly titled Love on the Run, in which there was only one significant romantic relationship conflict, and that only for a chapter or so. The bulk of the book–the major focus of the story–was not about the relationship, not at all. And that situation may exemplify why the RWA decided to pull back on its definition of a romance. Putting in just one problem between an established couple, one they quickly resolve, is not the same as writing a romance. 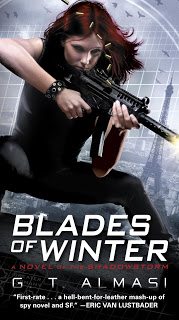 Another reason for the RWA’s action may be that, at rough estimate, half of the paranormal and urban fantasy and just plain fantasy novels being marketed today as having romantic elements or those being pushed at romance readers by the ubiquitous “tough girl in leather holding a big weapon” on the book cover have been written by people who do not see themselves as romance writers. A current example is Blades of Winter, by George T. Almasi, who probably would not be thrilled to think anyone considered his novel a romance. (Of course, maybe he would, if that means he finds a wider audience.) These books typically do not share the romance sensibility. They do not demonstrate a fulfilling romantic relationship as crucial to happiness in life. They do not insist that closure in such a relationship is important to the ending of a novel, especially if they tend to write series.

It’s not that some paranormals aren’t very much centered around romantic conflicts. Stacia Kane’s City of Ghosts, Unholy Magic, and Unholy Ghosts has a lot about ghosts (duh), and plenty of dystopian future world-building, but the core of these novels to my mind is the heroine’s emotional dilemma about her relationships with two men. Will she? Won’t she? Should she? Shouldn’t she? Oh, no, she didn’t?—these are crucial questions, not mere afterthoughts. When I think of how an entire straight-on romance of decades ago might at best have ONE, just one passionate kiss (never described), and I compare these three novels, I feel confident that calling them romances is not an exaggeration. But I could be wrong. It could be that a romance must be 90% the relationship and only 10% some external problem. Nah. The mix waxes and wanes, but it’s the treatment of emotion that defines romance.

Whether we call a novel a romance or something else is dependent on the emphasis the writer (and thus the heroine) places on emotions. If the heroine is cool and dispassionate, and the story goes on and on about spells, or monsters, or whatever, I can’t call it a romance. If the heroine is seeking that warm chest to rest her head on, and fretting over which man is the right one, then regardless of how many dead people she sees, or raises, or liquefies, it’s a romance.

My opinion. Now to get it across to the RWA board of directors, a group that sincerely tries to do its best by the romance genre, but whose actions are taken unilaterally, without polling its membership. Nothing romantic about authoritarianism. That’s what we’ve gotten away from in romance relationships in fiction, and hopefully in real life. Now we need to work on bossy organizations.