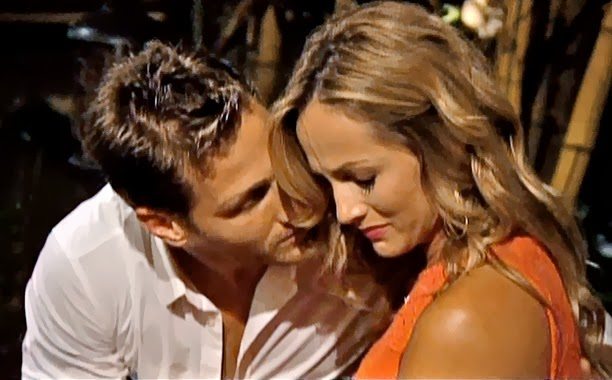 Quotes:
“That would just be stupid because I always do.” —Nikki on the possibility of not getting the rose on her one-on-one.
“I feel like I stuck my finger in a light socket.”—Nikki on kissing Juan Pablo. Somehow this analogy isn’t working for me.
“Either I live or I die or I poop my pants.” —Nikki on descending to “Hell.”
“I need to know that he sees me as a panda in a room full of brown bears.” —Sharleen on her need to feel special on the group date.

This week we travelled to Vietnam. Not as cool as karaoke in a dollhouse, but very, very beautiful!

Renee scored the first one-on-one date. About time! Juan Pablo seemed a little off — maybe it was because he was dying of dehydration. Renee gets a silk dress to wear to dinner and they buy some gifts for their kids. Once again, Juan Pablo refuses to kiss her. Fine. Whatever. Who cares if I feel she is the only one he should be kissing! Obviously, she gets the rose.

Riding down a river in round bamboo boats — fun! Watching Juan Pablo ride down a river in a boat with Clare — not fun. At the beginning of the date Juan Pablo tells everyone to pair off to ride in the boats. As there is an odd number of girls everyone pairs up except for Clare because nobody likes her. So she gets to ride with Juan Pablo. Thus starts a group date where every other girl besides Clare constantly says they feel like they are witnessing a one-on-one date with Clare and Juan Pablo. Yes. He makes out with her in the boat. Andi is the pouty one this time around. Who can blame the girl! It’s tough watching Clare steal the show. I mostly feel rage. Sharleen also feels a little low and expresses her need to be a panda, not a brown bear. Unfortunately for Sharleen, Clare is the panda who gets the rose. But it’s not enough for Clare to have the rose — she sneaks to Juan Pablo’s room and invites him out for a 1 AM swim in the ocean. And because she opened up soooo much to him that day he feels obliged to humor her. Yeah… not really buying that one.

Nikki received the second one-on-one date and as a result was in much better spirits the whole week. They clime up Marble Mountain and then descend into a pit with a cave called “Hell” at the bottom. Nikki almost poops her pants from fear, but makes it out alive and receives a rose at the end along with lots of besitos.

The rose ceremony was the most interesting part of the episode. Juan Pablo FINALLY kisses Renee. They both seemed pleased. I was very pleased. Juan Pablo also feels remorseful about his ocean randevú with Clare. He pulls her aside to talk about it and things get super awkward because it sounds like he is saying that it’s all her fault. Not “we had fun, but it was a mistake,” but “this is all your fault, but I’m not mad at you, it’s in the past” sort of thing. Is this a case of lost in translation because Juan Pablo trying to express a complicated matter in a language he is still learning? Or is he just a jerk? Clare proceeds to dissolve into a teary mess for the entire night, blaming her “bad allergies” when the other girls notice. I feel slightly bad for her, because she is right, he should have just said no. However, she causes so much rage in me that I don’t feel that bad for her. Oh well. The tears in Juan Pablo’s eyes as he said goodbye to Alli, Kelly, and Danielle touched my heart and I instantly forgave the Clare situation. Will Clare be so forgiving? I don’t think so!

Adiós to:, Kelly and Danielle.