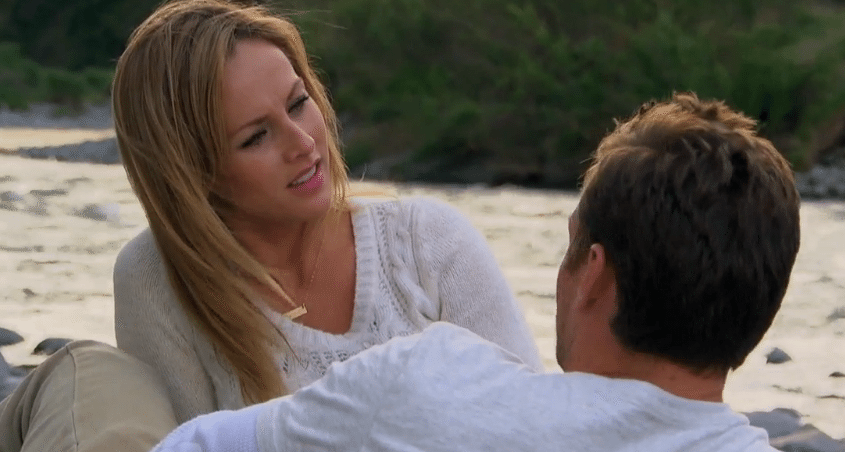 Quotes:
PRESSURE was building this week on The Bachelor:
“The pressure that I’m feeling is really just building and building and things just might erupt.”— Clare on her Juan Pablo butt-hurt feelings.
“I think dinner is going to blow her mind.” —Juan Pablo on dinner in front of a geyser with Andi.
“I feel nervous. I feel tons of pressure right now.” — Andi on the one-on-one dinner expectations after the geyser starts exploding.
Get it? Pressure? Geysers in New Zealand?! HA.

And there is this:
“New Zealand is definitely a romantic place and for some reason there is a little dark cloud over it.” —Claire seemingly puzzled on why she feels down when all she talks about is how Juan Pablo made her cry.
Recap:
Finally, Andi gets a one-on-one date. She and Juan Pablo journey down a river and then squeeze through a small cave to emerge on the the other side of the rocks to find a steaming-hot waterfall before them which they make-out in a lot. Then they have dinner in front of a geyser. I was thinking well that’s dumb, it’s gonna blow and they are going to get soaked. 30 seconds later, they are soaking wet. Is this some sick joke producers? She gets the rose.

Clare receives the second one-on-one date where she and Juan Pablo sit alongside a beautiful river and discuss what happened last week with the night swim in the ocean. Juan Pablo apologizes in a round about way saying it wasn’t his intention to upset her so Clare’s threats to go back into her “turtle shell” do not come to fruition. Sigh. No turtle shelling or crazy geyser-like Clare explosion as she threatened earlier in the show, which I was personally hoping for. During dinner Clare professes she prefers a casual setting compared to fancy dinners so they change into sweats. That would have been cute if I believed her or liked her. Of course she gets the rose.

Group Date: Kat, Nikki, Cassandra, Chelsie, Sharleen, and Renee.
The group date began with a picnic in the greenest pasture I have ever seen in my life. Next was Zorbing — dubbed “the human hamster wheel” — you get into a big inflatable ball with some water and then roll down a hill. Then just to make things even more cool, the dinner portion of the evening was in Hobbiton, the movie set from The Lord of the Rings. As great as this is, the excitement of the day seemed to have faded away, leaving all the girls in a very somber mood as they reflected on how things are getting more serious. Earlier in the episode Cassandra confides in Renee that she is finally feeling good about being away from her son. We also discover that it’s her birthday that night and all she would like for her birthday is a rose. Unfortunately Juan Pablo pulls her outside to send her home. Bummer. Sharleen whines about her doubts yet again during her private time with Juan Pablo and scores the rose for some reassurance BUT after the rose ceremony she is even more of a mess as she confides to the camera:
“I’m happy to be here… At the same time I feel wrong somehow. I guess I feel guilty in a way… And to be honest I can see other girls here suiting him better.”
It’s just too much! If she doesn’t leave next week and Clare goes on (let’s face it she’s a final three unless she does something crazy) my head is going to explode in rage.

Adiós to: Kat and Cassandra