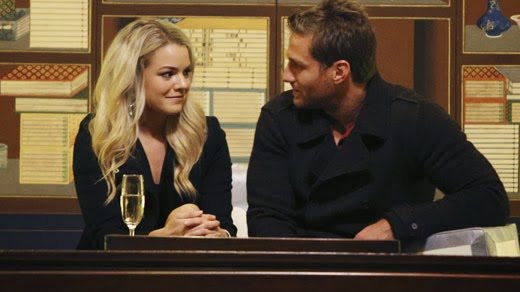 Quotes:
Not too many winners in the quote department this week… Oh well. There’s always next week!

“Korea?! I don’t even have a kimono.” — Clare
I believe the word you are looking for is hanbok.

“The date card says “pop” and my head is going to explode.” — Nikki
Get over it.

Recap:
This week we traveled to Seoul, South Korea. Knowing that I can sing karaoke in a dollhouse is a dream come true for me that I never knew I had. I want to be there right now…

Group Dates:
One: Being back up dancers for uber popular K Pop band 21.
Girls on Date: Kat, Nikki, Elise, Cassandra, Danielle, and Chelsie.
What Happened: Kat constantly showed off her dancing and in a surprising turn of events, Nikki spent much of her time pouting about the group date because she’s not good at dancing (not to JP’s face obviously), talking about how she doesn’t want to share him, and gossiping about other girls. I can’t tell if I really care or not about her doing this. She doesn’t like sharing — news flash — that’s how The Bachelor works. BUT at some point, if you aren’t aggressive, you will lose. BUT it’s definitely not necessary to talk about other girls to other girls. Nice or not, her tactics scored her the group date rose.

Two: Karaoke, skin-eating fish foot bath, and touring the streets of Seoul. CLEARLY this one is the superior date.
Girls on Date: Andi, Renne, Clare, Lauren, Kelly, and Alli.
What Happened: Unfortunately for all the girls on the date, Clare brought out her possessive craziness that I’m sure is here to stay. Every time she was not near Juan Pablo you could see her begin to twitch, trying to think of a way to get near him again. The exciting drama of the night was Juan Pablo’s resolution not to kiss anyone on the date because he wanted to tone it down for Camila. The night proceeded like this:
Doesn’t kiss Renee: She’s cool with it.
Doesn’t kiss Andi: She’s cool with it.
Doesn’t kiss Lauren S.: Major freak out because she knows he’s kissed other ladies even though he explains why not tonight.
THEN THERE WAS CLARE: Forgets his resolutions and kisses Clare because her “lips and her teeth” are just too tempting for him to resist. UGH. I want him to kiss Renee! However, as we know, kissing doesn’t seal the deal — Andi got the rose.

One-on-One:
Sharleen Sharleen Sharleen. Receiving the only one-on-one date with Juan Pablo, she was pleasantly surprised about how well their date was going as they wandered through a market in Seoul and went to a beautiful tea house. That is, until dinner, when Juan Pablo asks her about kids and she says:
“Kids, for me, is something that I never even thought about. I have dated someone who had a daughter… I was not ready for that.”
Juan Pablo credits her honesty as the reason for giving her the rose despite this fact. Did I miss something here? Did they leave out the part where she says, “but I’m ready now” or is Juan Pablo really being that lame?

Also, MERRY LATE CHRISTMAS. Apparently for all of Elise’s ranting about being a good role model for children, someone has been a little naughty. Check this out!

Adiós to: Elise and Lauren S.