“Anything Goes” isn’t just the name of a Broadway musical that has been successfully performed in every decade since it debuted in 1934. It’s also the truth about our society in the 21st century. Never have there been as many choices available to women at every step of their lives. As we look at the romances available for our entertainment in a wide variety of media, the romances enacted in the public arena in real life, and the romances in our own lives, “Anything Goes” is probably an apt description.

There may be women reading this right now who feel constrained and repressed by whatever ethnic, religious, or social group they were born or have married into. We can feel prisoner to our choices freely made, or to the choices our families tell us should be ours. But our laws and our social customs today allow us to make choices on our own, as Amanda Palmer details on her blog about getting married to Neil Gaiman. We also can repudiate the past and change our choices at any time. In “Anything Goes,” the young society girl, Hope, is engaged to a wealthy British aristocrat, Lord Evelyn. It’s a purely financial deal in which she’s an unwilling pawn. But Hope is free to turn it down. She can back out of the engagement without any legal ramifications, unlike the situation of a young woman only a century before, who was under the legal rule of a male parent. Only influence, not law or religious vows (in an even earlier era, an engagement ceremony had the legal and religious force of a wedding ceremony), can force her into the marriage. 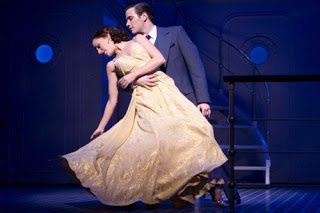 When her love for the chance-met Billy overpowers her desire to help her family’s financial situation through a sacrificial marriage, Hope wants to back out. But her emotions war. She still is under the moral influence of her mother’s fear of poverty. Hope needs the help of the other characters to show her a different path to happiness. After Lord Evelyn finds a way to break the engagement, Hope is emotionally free to choose her own happiness. It’s a matter of her moral choices, not her lack of choice, that puts her in a fix during this story. She wants her mother to be wealthy, and they both see the marriage to Lord Evelyn as the only answer. But they’re both mistaken, because her mother finds her own solution by marrying another wealthy man. 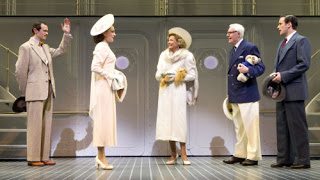 Women today are far more powerful economically than Hope and her mother, socialites left without any money by the Depression, but our emotions often are the same. We want the people in our lives to be happy. We take their views on what will make us happy very seriously. Sometimes, we even do what they want us to do instead of what we really want to do. But it’s our freely made choice. And if we do get pregnant too young, enroll in the wrong college, marry the wrong man, start the wrong career—or no career—we can choose again. We can’t undo the past, but we can change the future. In “Anything Goes,” the nightclub entertainer, Reno, clearly a gal who has been around the block a few times, ends up marrying the British aristocrat. She remakes her life story just as surely as the beleaguered Hope does. 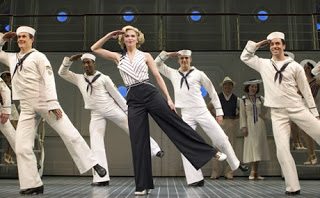 The world portrayed in this farce has a lot of social mobility despite the seeming class and financial barriers. Our society at large needed a few more decades to catch up with this amount of freedom, but catch up we have. Now, at all levels of our society, we listen to our emotions more carefully than at any other time in history. We make life choices more often based on what we believe will suit us personally than what will be convenient for the social group into which we were born. We have the social and the physical mobility to walk away from a life that is too rigid, too lacking in opportunity, too joyless. Or the reverse, if we feel bewildered by too many choices and too much freedom. We can remake ourselves into whatever we think we ought to be. As a devoted romantic, I wish every person can find true love the first time around, but often we make mistakes or are not lucky. What we want and need at one age isn’t the same as at another. Families sometimes are toxic, and social groups sometimes are very restraining or just not our cup of tea. In an “Anything Goes” society, we can leave it all behind and start fresh.

What a wonderful idea for the beginning of a new year: Leave the past behind. Start fresh.