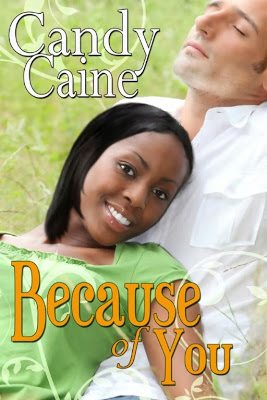 It’s a new year. During this time, I find myself more reflective about everything that has happened, the way things turned out – the successes and the things I wish I had a second chance at. So in the spirit of second chances, I have a great novella to share with you today called BECAUSE OF YOU. Here is an excerpt for your enjoyment!

Jill listened as Adam put on his shoes and left the room. Then several minutes later, she heard the front door open and close, followed by the sound of his car engine starting. Adam was gone. Perhaps he’d be home around dinnertime—perhaps not. At that moment, Jill hardly cared. She was too miserable.
As she lay there sobbing in the silence of her bedroom, Jill thought back to how things used to be in the early years of their marriage. It seemed like so long ago, but it had only been eight years.
She and Adam, like any other newly married couple, had been terribly in love and practically inseparable. It was as if they could never get enough of each other. She would be at her teller’s job at the bank watching the clock with one eye and counting the minutes until she could rush home to be enfolded in his loving arms. She’d always find him there waiting to make love to her. Half the time, they hardly made it to the bedroom. Where had all that love and passion gone?

Jill hugged herself as the memory of years past gently drifted through her mind…
They were celebrating their one-month anniversary of being together. Adam had gotten home first and had been waiting for her. He opened the door to their apartment and just seeing him standing there caused a surge of excitement to rush through her. As he swept her into his arms, his nearness made her senses spin. And when his lips hungrily covered hers, she felt a delicious shudder heat her body. Her purse fell to the floor, quickly followed by her coat.
His lips seared a path down her neck and shoulders, eliciting a low moan from her. She eagerly responded with her own feverish kisses. Her restless hands, needing to touch him, threaded their fingers through his thick, blond hair and slipped under his shirt, feeling the smooth texture of his hard back.
Adam had opened her blouse and kissed the swells of her breasts. Hungrily, he reclaimed her mouth. They began to slowly make their way to the bedroom. Clothing dropped as they kissed and bumped their way there. By the time they fell onto the bed with Adam straddling her, they were naked. Jill loved that feeling of skin on skin and had insufficient words to describe what it did to her.
Jill was halfway to heaven by the time Adam entered her. With their hearts hammering in their chests almost beating as one, a sense of urgency dictated their movement. Within moments, Jill’s world exploded into a myriad of vibrant colors as noises of pleasure filled the room.
The memory faded and tears of disappointment filled Jill’s eyes as she wondered once more, where had all that passion gone?