So if you have a good, fast-paced story with strong characters, lots of suspense and sizzling love scenes, readers are looking for you.

The touch sent another surge of electricity through her. With a quick intake of breath, McKay inhaled Harm’s clean, musky scent and savored it for just a moment, her eyes sliding appreciatively to the red heart tattoo with the “yes” inside barely visible on his arm. She smiled because she knew it meant he was up for anything—and ready for it. 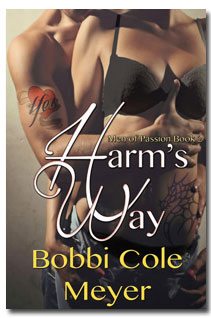 McKay McLemore is the best there is at her job—finding people who don’t want to be found. But when the super-sexy, Harley-Davidson rider, Harm Pranston, pays top dollar for her to locate a woman and her teenaged son she becomes suspicious. What are his motives? Is he stalking the woman who is running scared? Yet despite her trepidation, and against her will, McKay aches to feel Harm’s tough-as-nails body against hers.

Harm has his reservations about hiring the sharp-tongued McLemore to locate a woman he hasn’t seen in 16 years. First off, the red-headed investigator treats him like a suspected criminal, and secondly he has to fight his urge to lose himself in her. Just recovering from a gut-wrenching break up, the last thing Harm needs is a dragon-tattooed Amazon who makes him want to drag her off to a cave somewhere…

But when McKay’s investigation turns deadly, their trust in each other is put to the test—and failing could cost them their lives.

“Gripping and enticing, the story pulls you in right from the first page! You are left with no choice but to eventually fall in love with Harm…”
—Romance Addict Book Blog

HARM’S WAY IS AVAILABLE IN E-BOOK FORMAT FROM:

ALSO AVAILABLE IN PRINT FROM:

Ask for Harm’s Way at your local bookstore and library.

SOFTLY, AS I LEAVE YOU 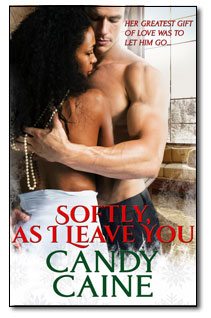 Ever since Alisha Houston runs into Daniel Mason on the ski slope it seems that they are destined to be together. At first, mad at the leggy, dusky- skinned skiing disaster, Daniel is sure he should keep a safe distance from her. But their paths keep crossing and he is puzzled how he can be so annoyed at a woman and still be so attracted to her. And she definitely turns him on.

Alisha is mortified that the one, sexy man she is fascinated with at the ski resort is the one she sends to the hospital! Then one shattering, unexpected kiss launches them into a love affair that brings red-hot passion and deep caring. Until Alisha’s estranged father dies, leaving behind a secret that devastates her.

SOFTLY, AS I LEAVE YOU IS AVAILABLE IN E-BOOK FORMAT FROM:

Scroll down to read an excerpt.

“Natalie’s story teaches us how her interminable suffering as a child translated into the deep suffering of her eating disorder. Her feisty and witty personality makes for a vivid narration of her long pathway to recovery. This is a very worthwhile read for anyone who would like to deepen their understanding of food addiction.”
— Nancy Christie, Psychotherapist 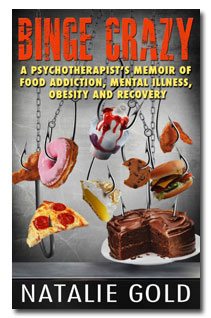 If you or someone you know struggles with weight and/or eating-related issues, Binge Crazy is a compelling read. It offers both an experiential and professional view of what does and doesn’t work in the treatment of binge eating and overeating, along with valid insight into the disorder’s psychological and sociological origins.

In Binge Crazy Gold’s story moves from a Toronto mental hospital to a taping of the David Frost show in London, England, spanning more than fifty years on two continents. “Binge Crazy is a true story of how I lost my mind and ultimately came to my senses,” says Gold, who has a private practice in Toronto and has led workshops on eating-related issues for more than ten years. “I now know I blamed binge eating and my mother for my misery. But really, my compulsion to overeat was just the symptom of a deeper unrest.”

Gold, a Registered Psychotherapist, is a graduate of Ryerson University, Toronto, holds a graduate certificate in Addiction and Mental Health, a post-graduate certificate in Gestalt Therapy, and is a member of the Ontario Association of Consultants, Counsellors, Psychometrists and Psychotherapists (OACCPP), and the Association for the Advancement of Gestalt Therapy (AAGT).

“Binge Crazy leads the reader from misunderstanding to understanding, from feelings of being ‘crazy’ to finding health and well-being and from despair to hope.”
— Keris Jän Myrick, MBA and MS and Leading Mental Health Advocate,
Former CEO, Project Return Peer Support Network

BINGE CRAZY IS IS AVAILABLE IN E-BOOK FORMAT FROM:

ALSO AVAILABLE IN PRINT FROM:

Ask for Binge Crazy at your local bookstore and library.

SOFTLY, AS I LEAVE YOU — EXCERPT

Alisha watched as Daniel put the bottle between his lips and sucked. She wondered how those lips would feel on hers. How she wished his beautiful hands were caressing her instead of the bottle. She pulled her mind away from such provocative thoughts. “I’m relieved that you won’t have to struggle to go to work.”

“Me, too. And if I have any complications, now that I know you’re a nurse…”

She smiled and shook her head.

“I do have a hard time working with the crutches. They definitely not as flexible as ski poles.”

“If I could turn back time and undo everything I’ve caused—” She was still upset about crashing into him on the ski slopes.

“Stop beating yourself up, Alisha. Things are supposed to happen for a reason. In this case, I think it was for us to meet,” Daniel said.

“Wouldn’t it have been a great deal better if we met at dinner?”

He shrugged. “Perhaps. But then there would have been no drama.”

“You know, you have a great laugh.”

“You’re the first one to tell me that. Thank you.”

“How long are you staying? Daniel asked.

“Til Sunday.” Alisha noticed that he had finished the bottle and asked if he wanted another.

“Not just yet,” he said. “I’m leaving on Sunday, as well. Tell you what, why don’t you and I spend tomorrow in town together. I heard about a great seafood place and I’d like to have some lobster before I go home. How about you?”

“Are you really up to doing so much walking?” She asked with a concerned look on her face.

“Is that the nurse speaking or the woman?”

“You certainly are,” Alisha said, eyeing him up and down with exaggerated lasciviousness.

“And you’re a big girl, too,” he said, lifting his eyebrows up and down in an exaggerated manner, “and will be there to help me should I get into trouble.”

They both laughed. It seemed to sweep away any lingering anger or guilt.

The noise got louder and they could hardly hear one another, so Alisha moved closer still. Close enough for Daniel to inhale her pleasant scent of wildflowers. An Instagram picture of him kissing her on the ski slope in the middle of nowhere flashed in his mind.

They planned their outing. A guitarist joined the pianist and people were now on the dance floor. A wistful smile appeared on Daniel’s face.

“Can’t dance with this cast and crutches.”

She bit down on her full bottom lip. “Another thing to feel guilty about.”

Daniel placed his hand on hers. “Sorry. I shouldn’t have said that. It upset you. We’ll go dancing when my cast comes off.”

“But we’re both leaving on Sunday.”

“Have you forgotten we’re neighbors?” Daniel reminded her.

“Duh.” She slapped her forehead.

He squeezed her hand gently. “I intend to see a great deal more of you. Unless…”

They chattered until the bar was closing. His friends came to retrieve him, but wanting to spend more time with Alisha, he decided to go back to the Lodge with her. Emma and Josie had hooked up with two guys so it was just the two of them.

Alisha helped Daniel into her car. He quipped, “I usually help the woman.”

“Indeed you have,” he said and leaned over to gently kiss her. He went back for seconds and when
Alisha parted her lips, he slipped his tongue inside. She put her arms around him and the next kiss lasted longer, enough for both their hearts to accelerate. The kisses had been telling and they both felt something. Realizing that they never going to get back to the Lodge if they continued, they reluctantly pulled apart, breathless.

“Which is your cabin, Daniel?” Alisha asked as they approached the Lodge.

Alisha parked the car and got out. Then she helped Daniel out. When he was balanced on the crutches, she walked him to his door and opened it. It appeared empty.

“Are you going to be all right on your own?”

“See you tomorrow,” she said and tilted her head so their lips could meet.

The kiss was pure dynamite and Alisha could feel the imprint of his mouth long after he hobbled inside his cabin. Then she drove to hers which was close by.

As she undressed, two thoughts occurred to her: her strange dream had been about Daniel and might be coming true; and she had a wonderful feeling that this was going to be the most enjoyable Christmas she’d had in a very long time.