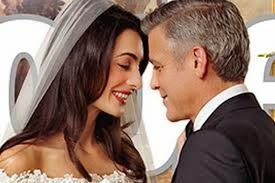 After over twenty years of swearing he never would marry again, actor, producer, and political activist, and all-round hot guy George Clooney got married again after all.

Why did this happen? How could this happen? He’s smart, he’s handsome, he’s rich, he’s a big deal actor and Hollywood producer, he’s had numerous extremely beautiful and glamorous girlfriends, and his buddies are cool guys, too. He’s the nephew of the beloved singer, Rosemary Clooney, and his cousins are actor José Ferrer’s kids. George is even distantly related to Abraham Lincoln, and even to Pat Boone, which means also distantly related to Daniel Boone. George is Hollywood royalty, as they like to say. What’s more, after serving a very long apprenticeship as an actor, when he hit it big, George went after worthy projects instead of squandering his big chance. Okay, well, Batman and Robin was a total stinker, but he soon showed he could do a lot better.

What happened? Sure, Amal Alamuddin is tall, beautiful, glamorous, and a human rights attorney with a classy British accent. But what’s she got that all those other women didn’t? George Clooney’s heart, that’s what.

If a hottie like George Clooney can change his mind, it gives us all hope. Not that some stubborn man we already know will change his mind and suddenly declare he loves us, but that just around the corner there is the right person, the person even George Clooney cheerfully changed his mind for. He had no reason to seek a mate, but when he found her, he recognized her as The One.

Finding The One is what happens to many a confirmed bachelor, and it can happen to confirmed bachelorettes, too. Sometimes it happens when we’re already in a relationship. Awkward. The world is strewn with broken marriages because someone finally met the right person. The belief that there is a right person for each of us is what keeps some of us from settling, but some of us give up. We decide there is no soul mate around the corner. We settle for a guy who is worthy, but whom we’re not crazy about. Only if neither of us finds true love elsewhere, and both of us are loyal to each other despite any feelings for someone else, does that work. In our modern world, the virtue of loyalty is not valued as highly as the virtue of honesty, and if we find The One, even if we’ve just walked back down the red carpet from the altar, society encourages us to go after that person. 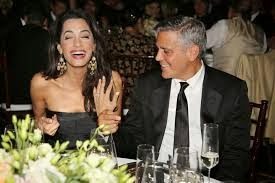 Something else happens a lot today. Many of us fall so easily into steady living-together relationships that we don’t keep looking for the right person. That wrong guy doesn’t have to be George Clooney come knocking at your door, overwhelming you with his glamor and charm so you don’t ask yourself if you really love him that way. The wrong guy could simply be the available guy, whose attraction lies largely in the relief of not having to date anymore, the comfort of living with someone instead of living alone, and the pleasure of having regular sex with a human being instead of with…well, you know. All these things can blind us to the reality that if we haven’t found The One yet, we haven’t found him. And we should keep looking, instead of trying to talk ourselves into thinking the guy in bed with us could be the right person if he’d just shape up, or if he’s just say he loves us, or if he’d just….

George Clooney didn’t even know he was looking. In fact, he swore he wasn’t. But his relationships with his girlfriends didn’t last a long time, because his social life, let’s face it, is astounding, and he can continually meet attractive, interesting people at the top of their game. He still was looking without knowing it. And then he found her. Of course I can’t foresee if this marriage will be a success, because that depends on lots of things. But it’s a very good sign that George let down his guard enough to get married again. In these days of easy affairs and relationships, we ought to think about the importance of finding The One.