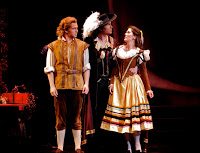 You’ve probably explored YouTube’s vast collection of video kisses, which includes movie kisses, television kisses, music video kisses, behaviors just like kissing, passionate glances indicating a desire to kiss, and more. I just found them and am totally surprised. I thought I was the only person in the world who treasured a few seconds of this or that movie, or TV show, or whatever. I’m a sucker for a romantic gesture, whether it’s a hand on someone’s cheek or merely a pregnant glance. Apparently, so is the rest of the world. Try the topic “romantic” on YouTube for even more montages of memorably romantic moments. If you get tired of that, you can Google “romance” and see an enormous number of romantic images without a sound track.

Why was I looking for love on the Internet? Like many people, I had a question in mind and just wandered across town, as it were. I started out looking for photos of Zerlina, the comic character in the opera Don Giovanni who almost lets the aristocratic Don seduce her on her wedding day. After that foolish action gets foiled by one of his many ex-lovers, Zerlina has to woo her new husband, Masetto, out of his angry mood. He of course knows exactly what Don Giovanni was after with Zerlina, but Masetto’s plebian station in life made him unable to stop his upper crust rival for his wife’s favors. So he’s mad at her. We don’t have droit de seigneur anymore, and it’s a good thing, but if a charismatic, age-appropriate movie star suddenly dropped in on your life, you, too, might forget everything and want to just go with the moment. George Clooney for the older set. Robert Pattinson for the younger. Perhaps People Magazine’s Sexiest Man Alive this year, Bradley Cooper? Cooper even speaks French, the language considered the language of lovers. Don Giovanni is usually sung in Italian, which can sound just as sexy, as Thomas Hampson shows in this clip.

I saw Don Giovanni recently in a suburban movie theater as an HD simulcast, a venue which is becoming all the rage for high-class entertainments including Shakespeare and ballet. Also wrestling and pop concerts. My companion was someone who had never seen an opera up close before. He was blown away by the seductive sexuality of the Zerlina. Granted, he might have been impressed by any movie screen–sized image of any sexy young woman, but this Zerlina was charming and sexy as she confidently seduced her own husband into forgetting how mad he was at her. All was soon well, despite her moment of being distracted and lured by the glamorous Don. At the end of the opera, Don Giovanni gets dragged to hell and the young couple is happy. Score one for the good guys.

But what does trying to find a few cute photos of Zerlina have to do with finding a treasure trove of romantic scenes on the Internet? Aha, we’re now in a Bing ad, in which the search engine company reminds us how distracting the Internet can be when we have too many choices. Scientists have proven that people with too many choices become paralyzed and can’t make any choice at all. That’s probably why a romance story usually offers a heroine a choice of one or two men only. As Zerlina’s escapade with the Don illustrates, sometimes even having the choice of two men is confusing. Kind of like my experience on the Internet looking for love.