This panel from Superman #141, published nearly fifty years ago, is to me the most heartbreaking comic book panel ever produced. Why? Because in it, Lyla Lerrol is shown realizing that the man she loves, Superman, has been ripped away from her and can never return. There are no words. There is no need for words, because artist Wayne Boring put everything into the art that anyone needed to say: she knows it’s over, and there is nothing she can do. They will be parted forever. Perhaps you need to have read the comic book story first to get this feeling from the image, but I doubt it is a mere coincidence that this panel was the one chosen for the Wikipedia entry on Lyla Lerrol. I am not the only person who reacted strongly to the artful depiction of a tragic moment when love was lost. 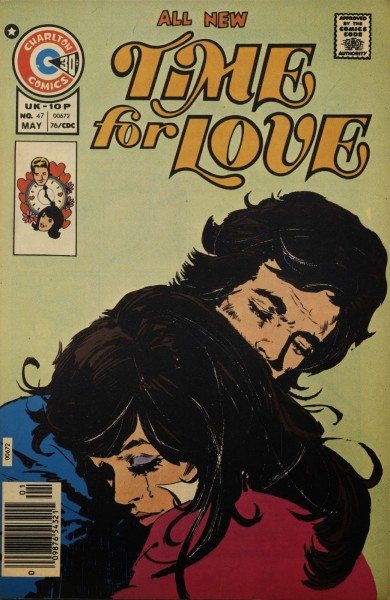 Sometimes we don’t think about why we react to something, why it moves us. We merely experience the moment. This clinch cover from Time For Love #47 doesn’t explain a thing, does it? But it tells us this man and woman have a close relationship. The cover draws us in to find out why she’s crying and why he’s holding her. Although the era of this comic book might be suggested from the hairstyles, his in particular (it was published in 1976), there aren’t many details to anchor the couple to a particular social or geographical setting. That has both positives and negatives. Maybe we’d like to know why they are together, what careers they have, or where they live. We might want to know if this is a tale about a summer fling, or if they keep fighting and breaking up over some personal issue or because of outside interference. The advantage of not showing any anchors is that there aren’t any details to turn us off. The cover says this story is about love and heartbreak, and that’s enough. 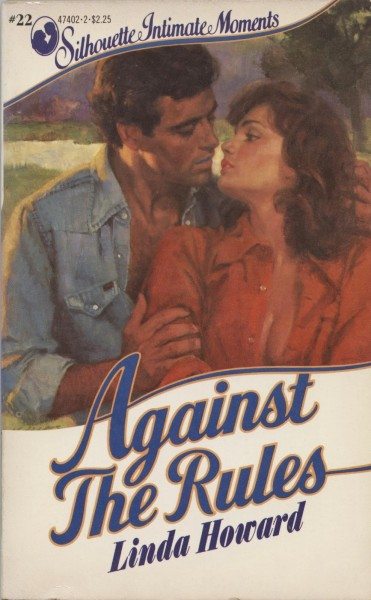 Linda Howard’s old-time Silhouette romance novel, Against the Rules, has had several covers since its first publication in 1983, starting with this clinch cover. It’s a sexy cover but not as risqué as some for other authors’ books. Everybody has their clothes on, although if you look carefully, you realize that both the man and the woman have unbuttoned their shirts. It’s suggestive without being obvious. The focus of the art is on their faces, not their bodies. The patch of light yellow highlights their lips almost touching. The romantic pose and lush painting style both tell you this is a sexy romance. When this novel was first published, contemporary romances were just revving up to be as explicit as historical romances had become, so this was considered a steamy cover. (I know. We’ve come a very long way since then.)

Oddly, the current cover for this same romance has no people on it. She’s such a well-known author now the assumption is that the book sells on her name alone. But I tend to think a cover without any clues to what is inside is a bit of a waste. Yes, clearly this is a bestselling author, and many people are willing to read a book merely because the author is so successful. They assume, sometimes correctly, that all those people who have turned this author into a bestseller can’t be wrong. 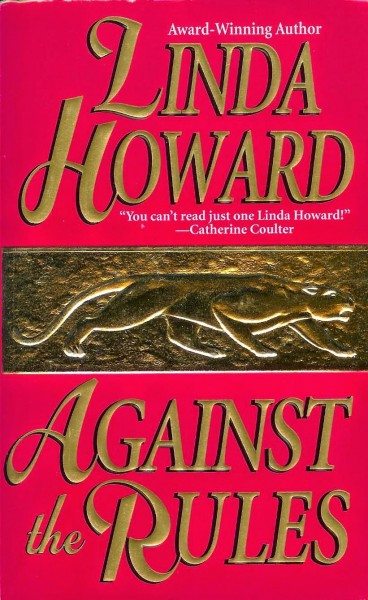 But in my opinion, a cover should show us something to think about and ideally to care about. What if you don’t know anything about a particular author? This newer cover only has the outline of a panther. Is that a symbol for a sexy romance? I don’t think so. It’s not enough to know that this is a popular author. You also need to know what kind of book it is. The recommendation from Catherine Coulter says nothing about whether this is a contemporary or a historical romance, or a thriller, or an archaeological mystery. Some people will pass it by because they can’t be bothered to find out.

Have you noticed that all of these examples are wordless? The Superman panel never had any word balloons. The romance comic doesn’t even attempt to explain why the people are embracing. Neither version of Against the Rules places the characters on a ranch. Despite our wordy culture, we do tend to let some visuals speak for themselves. Many have a lot to say–and a few don’t.