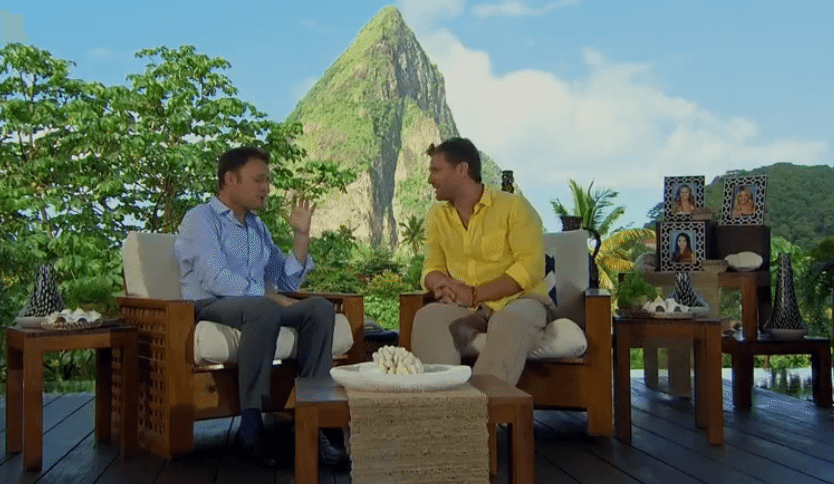 Wow! What can I say about the past two nights? Hometowns pale in comparison to last night’s drama! WHO EVEN CARES ABOUT HOMETOWNS AT THIS POINT? All in all, they seemed to go well. Clare had a crazy older sister who is clearly the odd ball out in the family and was super awkward during family time, acting as their mom’s body guard and voice. Nikki made Juan Pablo ride a mechanical bull and eat BBQ. Juan Pablo met Ben during Rene’s and he was super cute and sweet and good at baseball. During Andi’s, Juan Pablo learned how to shoot a gun. He sucked and Andi was awesome at it. Sadly, sweet Rene did not make it to St. Lucia.

Now — St. Lucia. Clare has the first one-on-one day. They went on a boat ride and as usual a lot of kissing ensued. In the fantasy suite, Clare tells Juan Pablo she’s “loving falling in love” with him. Bla bla bla.

Then it’s Andi’s turn. They spend the day wandering around St. Lucia and Juan Pablo takes her to another waterfall. We get to hear Juan Pablo saying lots of things besides “besitos.” It seems like each of them are having a great time until the Fantasy Suite…

Juan Pablo says:
“What we have — I didn’t know it would be this good. We laugh and talk for hours. Andi could be the one…”
Andi says:

“Waking up this morning I could not wait to get out of the the Fantasy Suite. I thought I was falling in love, but the Fantasy Suite turned into a nightmare. I really hope he did not think that was a good date… Every time I started to talk about feelings or something from my past or whatever it was always stories about him. He didn’t care about who I was… I just didn’t see someone who cared for me… There’s no filter and it just comes across as him not caring… It’s not cute, it’s just wrong. It’s very important to me to be with someone who loves me more than he loves himself.”

Nikki’s date is romantic. Juan Pablo takes her for a horse ride on the beach. During their time in the Fantasy Suite she works up the courage to say “I love you,” not “I’m falling in love with you.” Bla bla bla.

THEN before the rose ceremony, as in tradition of the final three, Juan Pablo watches videos of the girls. Andi is last and it says she has to talk to him in person. She confronts him face-to-face about her feelings. Shockingly she asks him if he even knows her religion, how she feels about basic social issues, why she is the way she is about opening up to him, etc and he is speechless. You just assume they don’t show the “boring” stuff. No wonder these couples never last! Sigh. He is totally blindsided and to Andi’s total annoyance he is “OK” with it. Just OK? Yes just OK. She leaves for good before the rose ceremony.

Is my Juan Pablo bubble finally burst? I think it might have a tiny prick (pun intended) somewhere. But to be fair, Andi isn’t the one for him so maybe he is a lot more natural with Nikki and Clare… Right? Fingers crossed.